A September 2014 report on social justice and technology.

E-Verify is an online database run by U.S. Citizenship and Immigration Services (USCIS), a component of the Department of Homeland Security (DHS). [25] It is designed to help employers quickly determine whether or not newly hired workers are legally eligible to work in the United States. Unfortunately, systematic problems have caused many eligible workers to lose their jobs or to face pre-employment discrimination. Recent studies have shown that these burdens fall disproportionately, and sometimes illegally, on minority groups, including lawful permanent residents and other authorized immigrants.

Today, more than 500,000 U.S. employers use E-Verify when hiring new workers. [26] When a new worker is hired, the employer enters the information from the new hire’s I-9 form into the E-Verify website. The site compares the worker’s information against multiple government databases held by DHS and the Social Security Administration (SSA). [27] These databases increasingly include data pulled from other local, state and federal agencies. E-Verify informs the employer that the new hire is work eligible, or else produces a Temporary Non-Confirmation (TNC) that the worker may not be eligible to work in the United States. Unfortunately, the process for contesting a database error is expensive and time consuming. And employers may not have the patience to deal with it.

Despite their importance, the algorithms used by E-Verify are not disclosed to the public.

For example, long names are often truncated in USCIS and SSA databases or on printed documents (and truncated different ways in different places) which leads to confusion for employers and, ultimately, mismatches in the system. [28] Matching algorithms determine how strict or lenient the matching process will be. A matching algorithm could allow the first name and the last name to be swapped (e.g., to account for cultures where the family name is printed first rather than second) or could ignore missing punctuation (e.g., to account for cultures with higher frequencies of hyphenated or typographically complex names). Other algorithms could be stricter, requiring an exact character-by-character match. In practice, these algorithms are more complicated, and may use a combination of strategies to tune their accuracy levels. But despite their importance, the algorithms used by in the E-Verify process are not disclosed to the public. [29]

Another common kind of mismatch occurs when a worker changes his or her name—say, because of a recent marriage—and the database still contains that person’s prior or maiden name. Until the database is updated, it will retain stale information about the worker. The matching algorithm may determine that the worker isn’t authorized because the system does not know that the new, married name corresponds to an authorized person. In one set of cases where E-Verify errors were successfully resolved, 94 percent of the errors were traced to the worker’s having legally changed his or her name. [30]

When the system cannot verify the worker’s eligibility, it issues a TNC to the employer, who is required to notify the employee about the adverse determination. If the employee believes that the TNC is a mistake, he must then contest the determination with the government—a painstaking process that can take weeks. 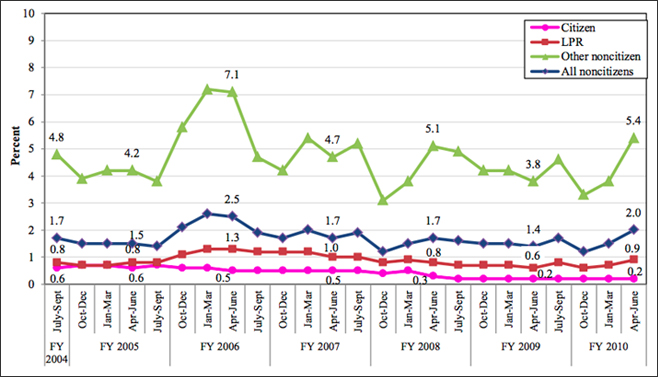 A recent DHS-funded study found a major discrepancy between the erroneous TNC rates for citizens and noncitizens. [31] It found that legal permanent residents (LPRs) were nearly five times more likely than citizens to be issued an inaccurate TNC, even though they were employment authorized (0.9% for LPRs versus 0.2% for citizens). That figure is even worse for other noncitizens, which were twenty-seven times more likely to receive an inaccurate TNC (5.4%).

Employers have restricted work, delayed training, reduced pay, and taken other unlawful actions against workers who receive TNCs. [32] Because of the uncertainty caused by TNCs, the National Immigration Law Center suggests that E-Verify “encourages employers to hire U.S. citizens exclusively, a practice that usually constitutes a violation of antidiscrimination law.” [33]

E-Verify is voluntary for most employers today [34] but there have been recent legislative efforts to make the program mandatory nationwide. [35] While automated technologies can bring vast efficiency improvements to many government processes, including this one, even small error rates that result from seemingly minor technical issues can have a life-changing impact on thousands of people.

E-Verify’s matching and verification problems are far from unique. Inaccurate information in databases, and the inability to consistently fix errors, have also been a major pain point in a number of other areas. The credit reporting industry has offered an Orwellian struggle to people with errors in their credit reports [36] (a still-bad situation that may be slowly improving [37]); a voter ID law in Texas requiring an exact match between the state’s voting rolls and the name on the voter’s identification card has caused difficulties for thousands of married women at the polls, forcing them to sign affidavits and file provisional ballots. [38] Error rates that look small on a spreadsheet can loom large in the lives of the people affected.

[27] Westat, Evaluation of the the Accuracy of E-Verify Findings 8-10 (2012), http://www.uscis.gov/sites/default/files/USCIS/Verification/E-Verify/E-Verify_Native_Documents/Everify%20Studies/Evaluation%20of%20the%20Accuracy%20of%20EVerify%20Findings.pdf (listing the names of no fewer than 13 government databases used by E-Verify).

[34] The federal government requires agencies and federal contractors to use E-Verify. Some states also require businesses to use E-Verify as a condition to apply for and maintain a business license.